Hmmm…. could this be the reason why Mohale and Somizi’s relationship couldn’t live to see the light of 2021? From what we gathered it seem like the Motaung’s never accepted Somizi as they thought he was making moves for Mohale to date his daughter Bahumi.

The latest evidence gathered from social media interactions shows that the Idols SA judge warmed his way to Mohale and his family’s heart using the name of his daughter. A comment from his ex-husband’s sister who is very fond of the brother has left everyone with their jaws dropped.

The comment was right under the star’s post and it read: “I don’t care, you guys don’t understand how this relationship has messed up my family. Somizi was going ka his kid is dating, she is young blah blah blah. The next thing he is busy with my brother, that is his daughter’s age. So it’s ok to destroy other kids but his must live in a perfect world,” she said. 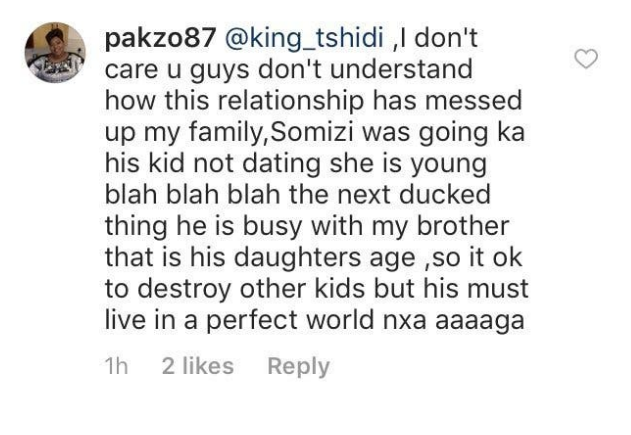 Hmmm… we hope now that the young man has managed to fly out of uncle bae’s claws everyone is happy.

Pastor Omotoso Back In Court Over Request For Judge To Recuse...

Pearl Thusi Dragged For Calling Herself A Brown Skin Girl

Twitter Wants #DMF’s Moratuwa And Simon To Have Their Own Reality...