Home Politics EFF EFF Calls On Arts And Culture Dep To Account For R1m Given...

The EFFSC on Saturday 27 November 2021 condemned Baleka Mbete and Natasha Thahane’s abuse of Power. This comes after the actress who is Desmond Tutu’s granddaughter revealed that she requested financial favours from former parliament speaker Baleka Mbete who obliged.

According to Natasha, she needed approximately R1 million to pay her fees in the United States Of America. She then reached out to Mbete who spoke to the Department of Arts and Culture, which later funded her.

YOU MAY ALSO LIKE: Nepotism At Its Finest! Natasha Thahane Admits She Received R1 Million From Government To Study In USA

The star made these shocking revelations during an interview on MacG’s Podcast & Chill with MacG. The actress told MacG that when she went to study in the United States in 2017, she needed help paying for her studies at the New York Film Academy. Spilling all the beans she went on to say that she then “called” Baleka and asked her to assist her in obtaining funding for her studies.

Baleka, who had so much influence as a speaker of parliament and the ANC chairperson at the time, approached the department of arts to arrange the money — in excess of R1 million — for Natasha’s studies.

“I asked Mam’ Baleka (Mbete) and was like, ‘Mama, I need to go back to school. I’ve been accepted… I don’t know what I’m going to do, can I have funds? Please arrange something for me.’ She managed to speak to (the department) Arts and Culture and they were able to help me,” she said on the podcast.

YOU MAY ALSO LIKE: Record Breaker! EFF Mayor Resigns – After Just Three Days On The Job

The EFF has slammed the Department of Arts and Culture saying the only time it’s visible is when it sends out condolences messages to families of late artists. The red berets have further called on the department to come clean on the process which was followed and investigate any irregularities which may have arisen.

In its statement, it also accused the government of discriminating against the less privileged youths of South Africa who have no connections. You can read their statement below: 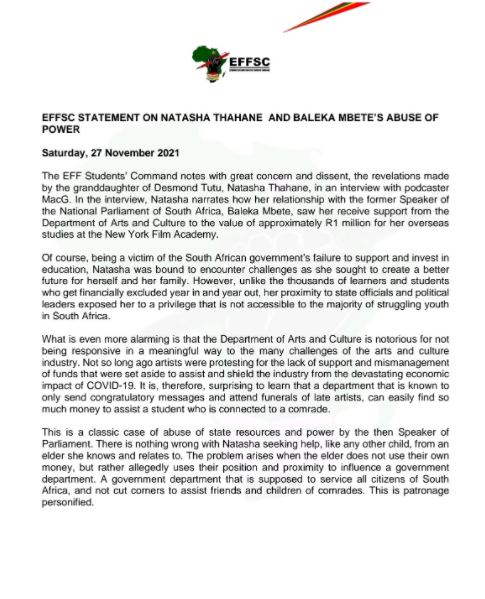 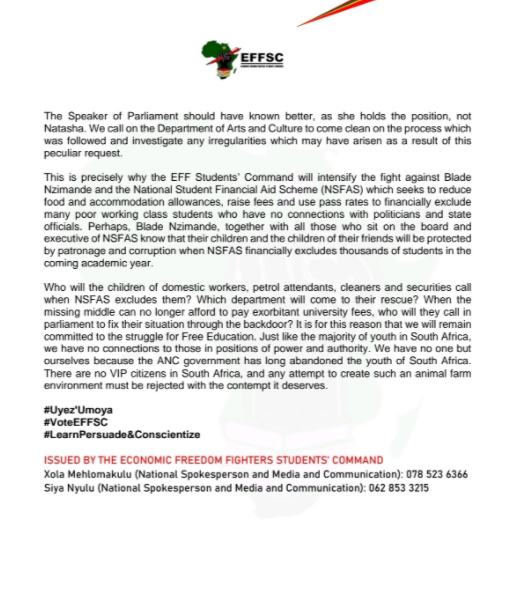 Watch| EFF Visits Restaurants To Examine Imbalance In The Number Of...

Somizi Fuming After Being Filmed While Clubbing With His New Ben...

CASAC: “Sisulu Should Be Fired For Attacking Constitution, Judiciary”

Sophie Ndaba Finds Love In Arms Of A Nigerian Pastor

ABOUT US
SurgeZirc SA is the South African edition of the SurgeZirc global multimedia blogging company which publishes news, politics, entertainment, lifestyle, sports and technology.
FOLLOW US
© 2022 SurgeZirc SA a member of SurgeZirc Media / by TekRic Dev.
wpDiscuz
0
0
Would love your thoughts, please comment.x
()
x
| Reply
When you use our website, we share information that we collect from you, such as your email (in hashed form), IP address or information about your browser or operating system, with our partner/service provider, LiveRamp Inc. LiveRamp returns an online identification code that we may store in our first-party cookie for our use in online and cross-channel advertising and it may be shared with advertising companies to enable interest-based and targeted advertising. To opt out of this use, please click here (https://optout.liveramp.com/opt_out).AcceptPrivacy policy