Sithelo Shozi definitely knows how to secure the bag and after securing it, she ensures that she has her claws dipped on it. The former DJ who has been called a pedophile a number of times already shares a child with Andile Mpisane. This time she has tried so hard to hide the latest developments which might make her stay longer in the relationship and in the Mkhize-Mpisane family that hasn’t fully accepted her.

If you check her recent pics you’ll notice that it’s either she’s wearing baggy clothes or using some object to cover her tummy. Funny right… for someone who likes showing off her body. It turns out that the 27-year-old is pregnant again with the 20-year-old’s child.

As much as she tried keeping it off social media a picture of hers slipped into the hands of bloggers. And it was spotted that she has a fast-growing baby bump. Check out the pic below: 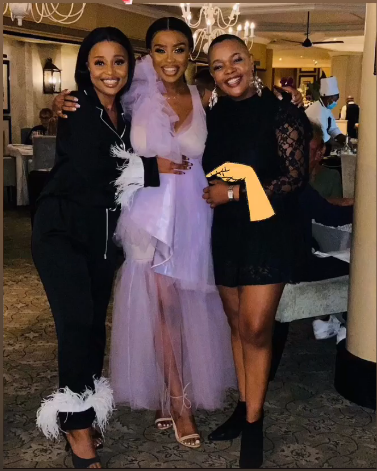 This pic was posted by her sister as they (Andile and Sithelo) were celebrating their child’s first birthday but then she quickly deleted not knowing that it has already leaked out. A Source further confirmed to SurgeZirc SA that Sithelo is indeed pregnant.

Wow, she’s such a bag keeper, congrats to the two!