It’s either someone is trying to damage Sandile Mahlangu’s reputation or his role as Simo on Scandal has gotten to him and now finds it difficult to differentiate between camera life and reality. Just grab a chair and let’s dish it all for you on his latest scandal which involves lying, cheating and using women but this time it’s in real life.

A lady recently took to her Instagram apparently out of sadness to say that Sandile used her for a one night stand. Not just that after toasting and turning her all throughout the night he blocked her and when she tried to get hold of him through social media, he slapped her with a very rude reply. She had receipts for this incident, showing proof she screenshotted the alleged conversation.

She wrote: “Yeah I met Sandile Mahlangu at the club, we hooked up then he ghosted me and blocked my number so I decided to slide in his IG DM and this is the savage response I got.”

Sandile then wrote back and said: “You are sad and all that energy that you have pent up in your upset little fragile heart will be the reason why you stay beneath my shoe. You weren’t even worth this response. I just wanted to give you the newsflash that you don’t matter and me knowing that you’ll read this and realize just how pathetic you are, gives me all the joy…Heal. ‘Seen’ my job here is done, now I’ll block you and I will forget your existence like you were a pimple.”

You can check out all the evidence below: 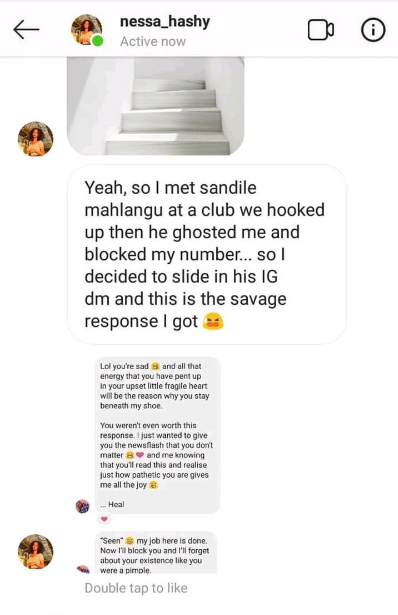 READ MORE: Ntando Duma Labelled Worst Actress Of All Times On The Queen 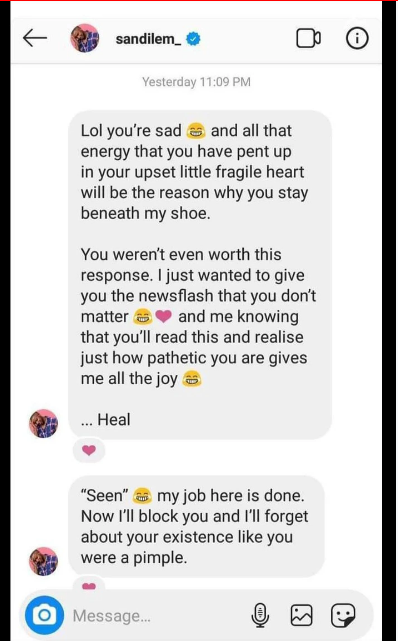 As the lady posted the convo, it circulated social media and it was met with mixed reactions. But the actor came out to clear his name and denied meeting the person or having anything to do with her. According to him, she made a rude comment about his sister on Instagram he was then responding to what she said.

“The stories circulating on Social Media are a lie, this human being, commented in an extremely disrespectful way about my family on a story I posted about my baby sister’s birthday. I responded the way I did, they then took the screenshots of my response and created some bullsh* story around it. Ask yourself why they only have my response and not the entire conversation?” Sandile wrote.

But then he didn’t bring us any proof, guess it’s his word against hers.  And that’s how a lot of his followers also felt. They told him if what he’s saying is true then he should post what she said but till now screenshot dololo.

Drama At OR Tambo As SAPS Force Italian Plane To Leave...

These Are Changes You Should Take Note Of While Paying Your...