Home Entertainment Did Khanyi Mbau’s Zimbabwean Lover Put A Ring On It?

Did you know that Khanyi Mbau now calls herself Mrs K and there’s a little jewellery on her left ring finger? Hayi shame, you’d swear that she has never been married before as her level of desperation it just on another level.

You’d remember that while she dated Tebogo she pretended to be engaged to him. She remained silent and when she saw that things weren’t going her way anymore she publicly denied the engagement rumours.

READ MORE: Sfiso Ncwane Reunites With His Daughter After Death

This year Khanyi introduced to us her new man, who is a Zimbabwean but fled to Dubai due to a few unpleasant reasons. Well, the infamous gentleman’s name is Kudzai Mushonga. The media personality has been flaunting him on social media, needless to say, that she’s madly in love.

Of recent, she started answering his name and has also changed her title to Mrs. If you want to call her, you gotta use the name Mrs K as she has even added it on her Instagram. You don’t believe that she can do such, right? Well, let’s disappoint you by showing you proof. 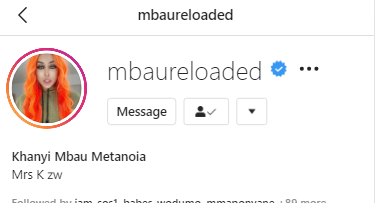 Three weeks ago her man bought her a Cartier 18 yellow gold love ring which goes for approximately R25 000 and she is wearing on her left ring finger. Wow, is Khanyi trying to send us a message that she might be walking down the aisle for the second time?

READ MORE: Prince Kaybee Says Busiswa Is Beefing Him Because Of Her Baby Daddy Issues

After all, Mr K does have similar qualities with Mandla Mthembu and that’s moneeey!

Ace Magashule To Talk To Mbeki After Getting Guidance From Jacob...

‘The Only Person Who Glorifies Apartheid Is Julius Malema,’ – Says...

Zoleka Mandela Remembers Ma Winnie On The Anniversary Of Her Death

WhatsApp To Stop Working On Millions Of Phones In February