It’s without a doubt that Twitter was divided after Lady Zamar decided to tell her side of the story regarding to Sjava denying he raped her. Twitter was chaotic with most women accusing Lady Zamar’s story of not adding up, but one celebrity who has been defending Lady Zamar is activist Ntsiki Mazwai.

Ntsiki Mazwai has been Zamar’s side from the on-set and has been putting out fires left right and centre.

READ MORE: Lady Zamar Claps Back At Sjava’s Video Where He Denied Raping Her

This morning she posted a tweet on how men in the entertainment industry will most likely rape because they don’t want to hear the word “No”.

“Men in entertainment are most likely to rape because they are used to female attention and don’t understand when women say no…they are not used to no, so they take what they think they deserve. Wake up.”

Men in entertainment are most likely to rape because they are used to female attention and don't understand when a woman says no….. They are not used to no so they just take what they think they deserve. WAKE UP

Soon after she posted her tweet, shots were fired at her, where some tweeps dragged her facial features on the debate. Stating how no men in SA would even think of raping Ntsiki because of being unattractive. 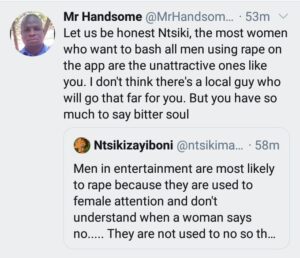 The poet didn’t pay attention to all the negativities she was getting. She posted a picture saying she’s not moved by all the negativities, and she won’t stop being vocal, because she was raped as well and wants to be the mouth piece for women who are afraid to speak up for themselves.

I believe that I was raped so that a big mouth like me could bring this topic from under the carpet…… The cycle ends with me.

But, most fans couldn’t let Mazwai be dragged in the mud for addressing something no one has the balls to talk about. However, they supported her statement and some commended her bravery.

Cancel Mr Handsome, you can hate Ntsiki all you want but this isn't right !!! pic.twitter.com/8DQkmRDUo1

Just because there is a collective agreement that Ntsiki Mazwai is unattractive & dirty does not mean she is exempted from GBV. pretty privileges can't take priority even on such violence topics.

People like @MrHandsome_ZA are the reason women get abused and killed. You look @ntsikimazwai with hate and believe she deserves horrible things just coz you don't like the way she looks. You encourage people to hate her, dismiss her, abuse her! Vile and inhumane

Thabsie Says Video Of Her Smoking Hubbly Was “Just A Joke”

Investigations Under Way After A Woman Falls To Death Her Death...

You Can Now Report Potholes On Joburg’s Roads Via WhatsApp