Whatever it is that led Nomzamo Mbatha and Maps Maponyane to split must have been so ugly that she’s now ready to open a can of worms.

We almost forgot that the two have dated until Maps got us excited when he went on a pic posting spree. The fashionista posted a pic of himself hugging a lady that could easily be mistaken for Nomzamo from behind.

Any excuse to celebrate, is always good enough to celebrate, especially when you’re celebrating your people🥂 . #LiveVictoriously #GreyGooseLife #RaiseAGlass

Well, fans were just excited that their favs are back together and some news platforms carried out the story but of course we didn’t because it was too good to be true. Imagine Nomzamo dating him again after all the cheating scandals and the treatment she received.

Maps tried clarifying that the lady on the pic was his friend Naledi but the former Isibaya actress didn’t budge she thinks that Maps Maponyane is just click-baiting his fans to start speculations.

She didn’t wait to fire her shots towards him. “Anything for clickbait huh… Not now. Not ever. Masego, Stop taking advantage of my silence and choice to be graceful through it all. Shake this can one more time and I’ll open it. @MapsMaponyaneyou made your bed. Lie in it,” Nomzamo tweeted.

Anything for clickbait huh…

Not now. Not ever. 😊
Masego, Stop taking advantage of my silence and choice to be graceful through it all. Shake this can one more time and I’ll open it. @MapsMaponyane you made your bed. Lie in it. ❤️ https://t.co/Q8wkFdS3mV

Yoooh…When somebody calls you by your real name just know that you’ve really annoyed that person and that’s what the lady just did right there he referred to him as Masego.

Ayeye Maps if you try one more wrong move your ex is ready to expose you… as she said stop taking advantage.

Let’s just wait and see if more drama will unveil. Before we leave apparently Maps Maponyane was cheating on Nomzamo because she wasn’t ready to give him the scone bun. However, he has now opened his own Mr Buns.

We figured that she might delete her posts and she deleted the last one but we’ve got your back as we have the screenshots. 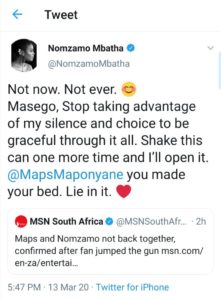 Is There Any Link Between 5G And Coronavirus? Here’s What To...

Zakes Batwini On Fire While DJ Tira Gets Cold During Lockdown...

Townships To Be Evacuated To Slow Spread Of Covid-19

This Video of Lesley Musina Gyming at Home During Lockdown Will...

Watch Jessica Nkosi Forced To Go Out During Lockdown Period

Bassie Gives Fans Hope During Lockdown With a Gospel Song

ABOUT US
Surge Zirc is an international multimedia blogging platform, covering rich contents on politics, sports, business, entertainment, technology, lifestyle, community, wellness, entertaining visual videos and many more, currently operating in three countries in the world.
Contact us: [email protected]
FOLLOW US
© 2020 SurgeZirc SA a member of SurgeZirc Media / By Lens Tech Inc.
SurgeZirc SA use cookies to ensure that we give you the best experience on our website. If you continue to use this site we will assume that you are happy with it.OkPrivacy policy