Mzansi was enraged after the poll which was posted on the station’s official Twitter page asking fans “what do you think of the new Miss South Africa Zozibini Tunzi, ‘Is she stunning’, ‘just okay’ or ‘wrong choice’?” yo yo yo yo!!! it on fire guys, but guys what do you think?.

On the statement posted on their Twitter page, the station distanced itself from the content of the poll and confirmed an inquiry is under way and those responsible will be dealt with accordingly.

The statement reads: “Metro FM is aware of the Twitter poll that went out on social media this morning on #TheWkndr Show. We confirm that the social media poll was unapproved content placed on social media without endorsement from the station.

READ MORE: ANC filed a motion of no confidence in Herman Mashaba

“Metro FM does not stand for the content of this poll and distance ourselves from it. We consider this to be totally against our ethos and brand values,” the statement said.

The station further apologised to Tunzi and the rest of South Africa.

“We together with the rest of South Africa celebrate women of all backgrounds, and are truly proud of the new Ms South Africa.” 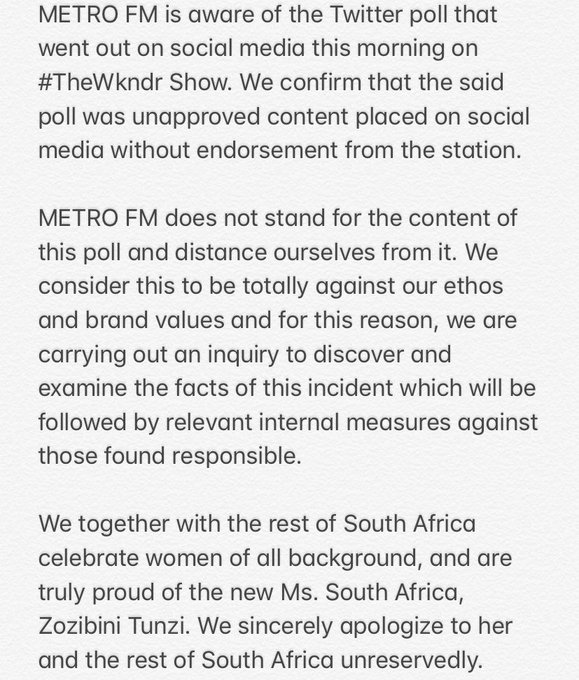 However, tweeps were hearing none of it, taking to Twitter, many expressed their disappointment at the station.

Ramaphosa: “South Africans Need To Build A Culture Of Responsibility”

US Is Now Asking For Social Media Info For Visa Applications

Trump Insists On Steel Wall With Mexico In Prime-time Speech

Don’t Be Caught Off Guard Here’s A List Of All Standard...

ABOUT US
Surge Zirc is an international multimedia blogging platform, covering rich contents on politics, sports, business, entertainment, technology, lifestyle, community, wellness, entertaining visual videos and many more, currently operating in three countries in the world.
Contact us: [email protected]
FOLLOW US
© 2020 SurgeZirc SA a member of SurgeZirc Media / By Lens Tech Inc.
SurgeZirc SA use cookies to ensure that we give you the best experience on our website. If you continue to use this site we will assume that you are happy with it.OkPrivacy policy