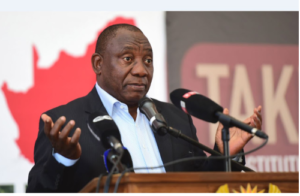 Presidency representative Khusela Diko said Deputy President David Mabuza didn’t deduce any “malicious intent” when he said on Thursday that the minister of public enterprises and the Eskom board had misled President Cyril Ramaphosa regarding load-shedding.

Diko would not say late on Thursday whether Ramaphosa had been misled about the circumstance at Eskom, as the present load shedding in the nation was unplanned.

Diko said the responsibility made by the Eskom board in December was that there would be no plan load shedding before January 13. The load-shedding experienced since the weekend had been unplanned, she said.

Her remarks were referring on Mabuza telling media that Ramaphosa was misled.

“They’ve misled the president, but right from the day we went there with the president I insisted on maintenance,” he said to journalists on the sidelines of an ANC blitz in Kimberley on Thursday.

READ MORE: Load Shedding Will Continue For Another Five Years

“And they have given us the assurance that from 17 December right through to 13 January, we should be in a position to have any form of load shedding, and going right through to March they will be seeking to do everything they can to restore the stability of the network.”

Meanwhile, in a statement issued a short while go, Eskom reminded customers that load shedding was an essential and controlled measure to ensure that the integrity of the grid was not compromised.

Valdo And His Dad Turn Homeschooling Into Something Cool And Fun

AKA Tests Positive For Covid-19 And Wants To Share His Road...

EFF Calls For Immediate Step Down Of EC Health MEC

Makhura Has Tested Positive For Covid-19

ABOUT US
Surge Zirc is an international multimedia blogging platform, covering rich contents on politics, sports, business, entertainment, technology, lifestyle, community, wellness, entertaining visual videos and many more, currently operating in three countries in the world.
Contact us: [email protected]
FOLLOW US
© 2020 SurgeZirc SA a member of SurgeZirc Media / by Lens Tech Inc.
wpDiscuz
0
0
Would love your thoughts, please comment.x
()
x
| Reply
SurgeZirc SA use cookies to ensure that we give you the best experience on our website. If you continue to use this site we will assume that you are happy with it.OkPrivacy policy